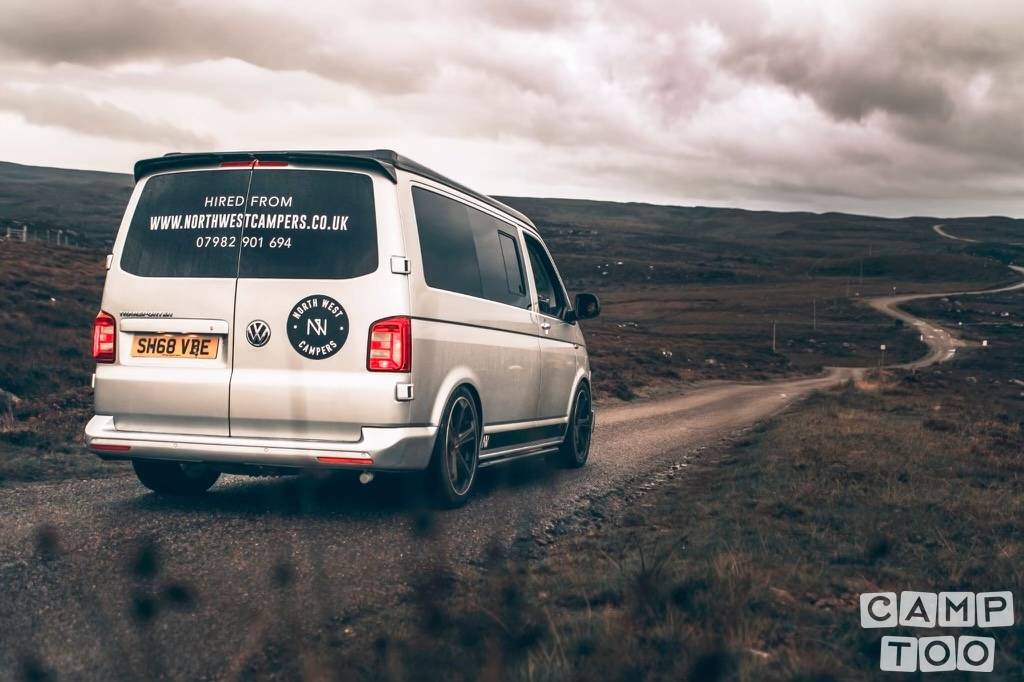 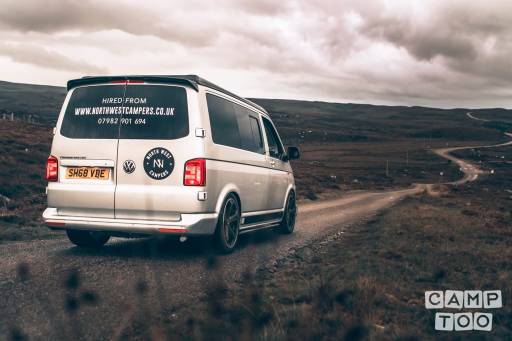 This 2018 VW T6 camper is perfect for touring the UK in style whether it’s a weekend away with the family or multi stop sight seeing trip. Do it in style and comfort with air conditioning for those hot summer days and night heater for cooler evenings. The pop top roof bed provides extra space for the second bed which sleeps 2 adults, in addition to the rock n roll bed which also sleeps 2. The fridge, 2 gas burner hob and sink make it an easy option to stock up and cook yourself if you want to. This camper has been converted by North West Campers and designed for use all year round. IMPORTANT INFORMATION PLEASE READ: UK trips only due to insurance Collections between 3pm-5pm Returns by 12 midday Unlimited mileage, insurance and camping gas included We need copies of each drivers license (front AND back) along with 2 x proof of address which must match your license. If it’s not up to date please do this ASAP via the DVLA website, our insurers will not cover you if we don’t have this information on file. Feel free to park your car at the collection point and leave it for the duration of your trip (parked at owners risk)

All we ask is that you take care of our camper like it is your own, please don’t exceed the speed limit, no smoking, no pets.

Our first trip in a camper van and probably won't be the last. The van was great, the conversion is excellent and the interior is lovely. No restrictions placed on where we could go, so we had a trip to the lakes and a trip to North Wales. Handover's done by text and through the camptoo app were all easy and seamless. Was happy that David was accessible by phone should we have needed anything. Spot on.

Great communication with David and his wife who offered me an early pick up which was helpful. Explained all about van on handover and demonstrations, that were big help. Van was spotless, and around great condition. Great drive, responsive, drove like new and handled great.. All round great experience, and highly recommend. Many thanks, Trev

My family enjoyed 7 nights in David's camper. He was easy to work with and the turnover was simple. I'll start with the pros and then the cons: Pros: * good fuel economy for a vehicle of its size * pop top was great for our two kids * heater worked great when I could figure out how to turn it on * unlimited miles and allowing international drivers license was what pushed me to choose David's van, and made for a great way to explore Scotland Cons: * It wasn't fully valeted; e.g., there was a nearly full tank of gray water that I had to empty, which was pretty nasty * The water pump was pitiful, it was easier to buy a jug and do all washing up outside (esp since the weather was fantastic). David mentioned he might replace the pump. * The GPS speed (according to Google Maps) was about 4mph higher than the speedometer at 70mph, so be aware of that if you like to get close to the speed limit. * The suspension/body kit makes it a bit low to the ground. Be aware of that if you plan to go to Skye, for example, as the roads there weren't friendly for a van this low. * I suggest that David add a small brush to clean the floor and some blinds for the front windows to keep it dark inside, esp in the summer when the sun rises before 6am. Everything else was as pictured and advertised. I chose David's van because of the unlimited miles, international drivers license acceptance, and positive reviews. I will be honest that I was disappointed in the cons that I encountered, but David was apologetic, and if he resolves them (those that can be anyway), I would recommend this van to others.