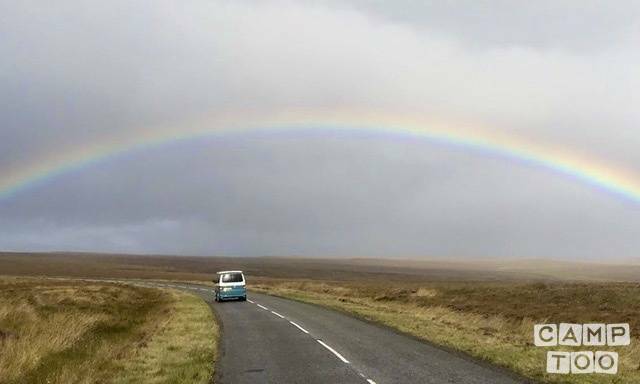 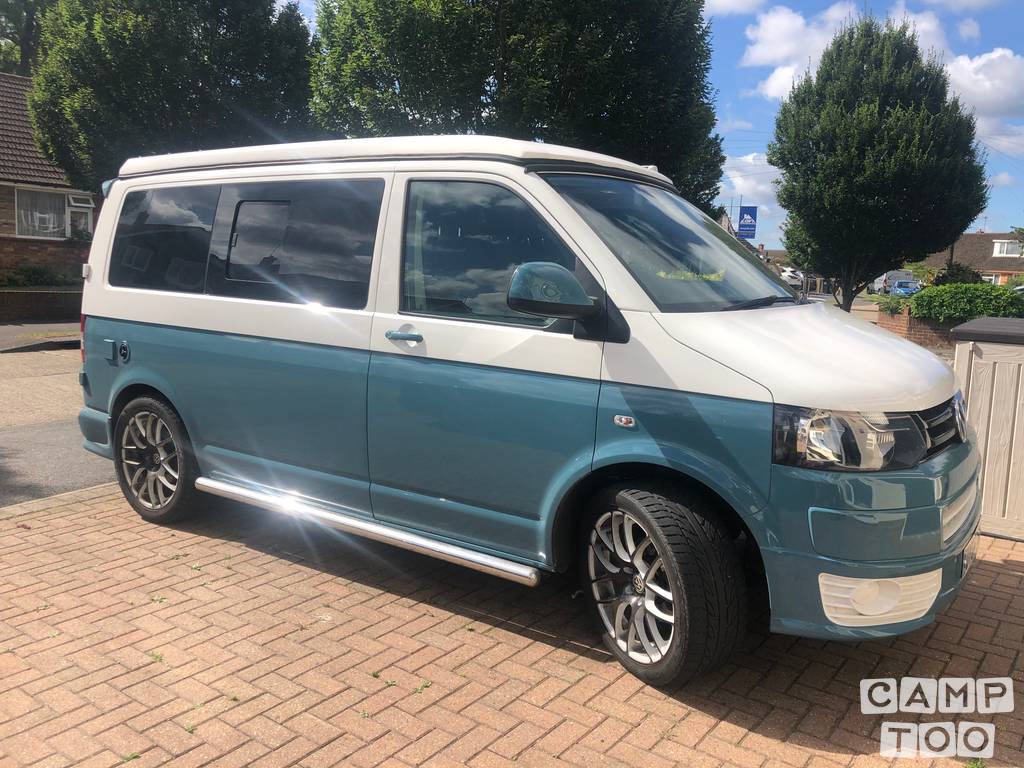 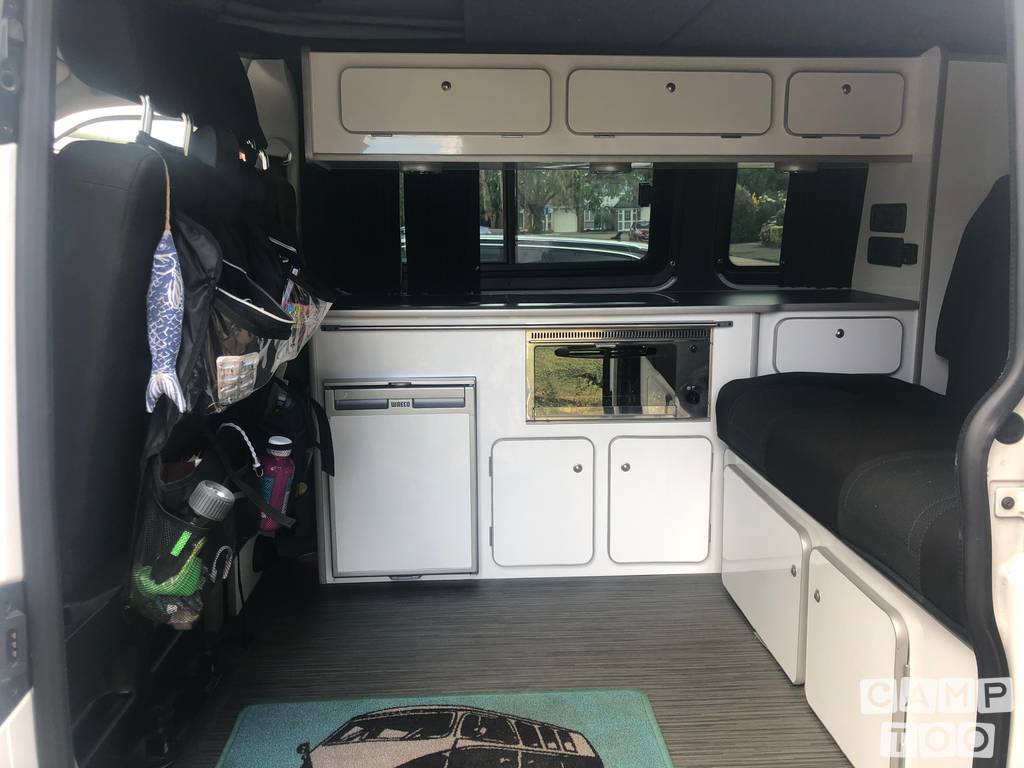 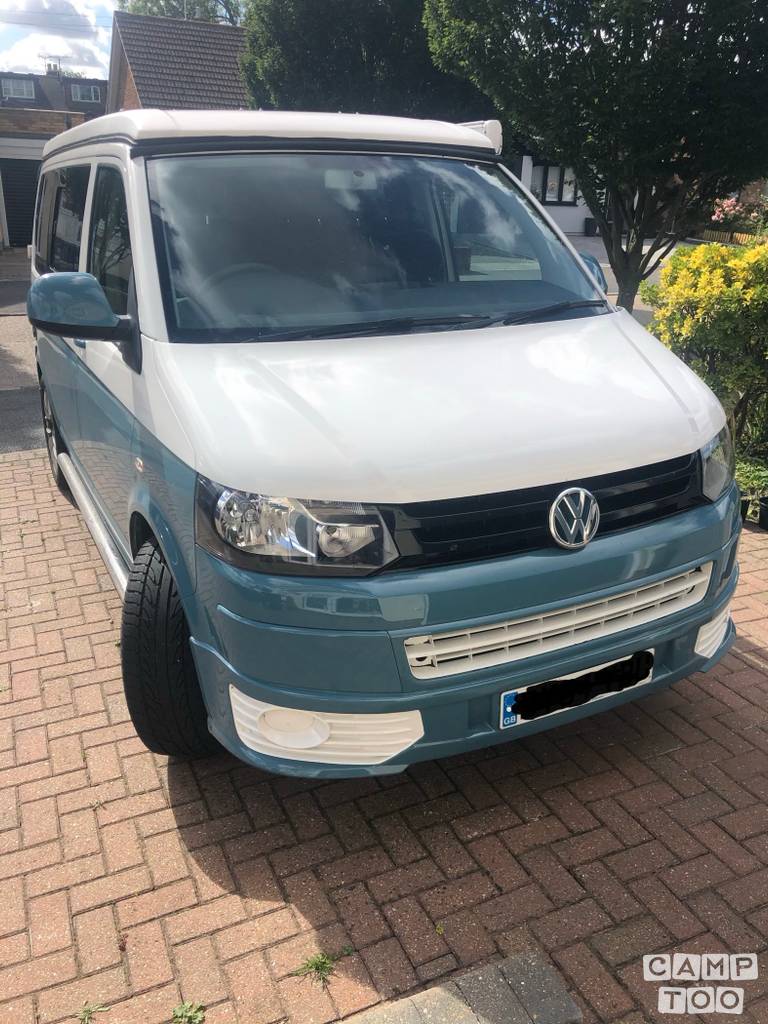 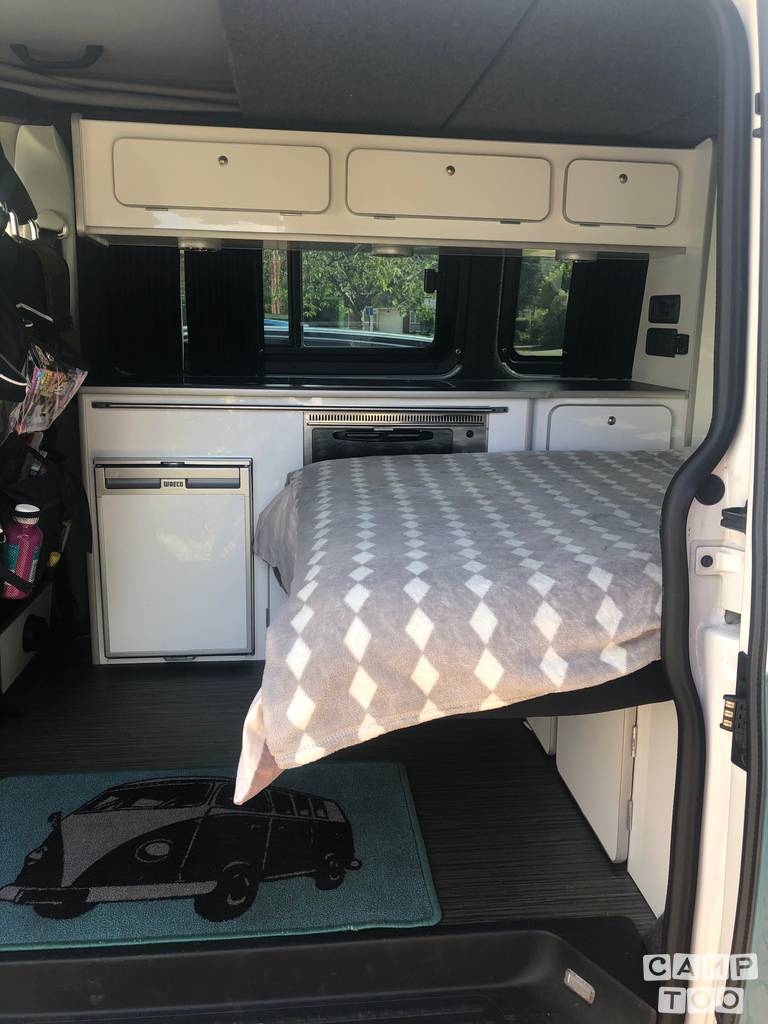 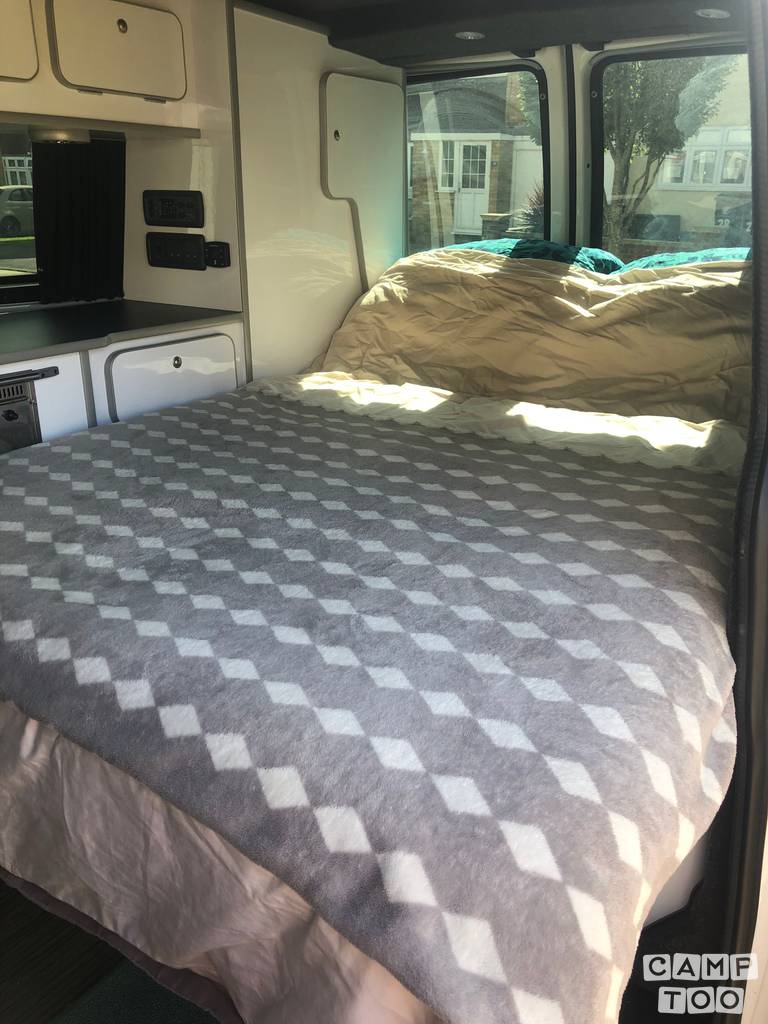 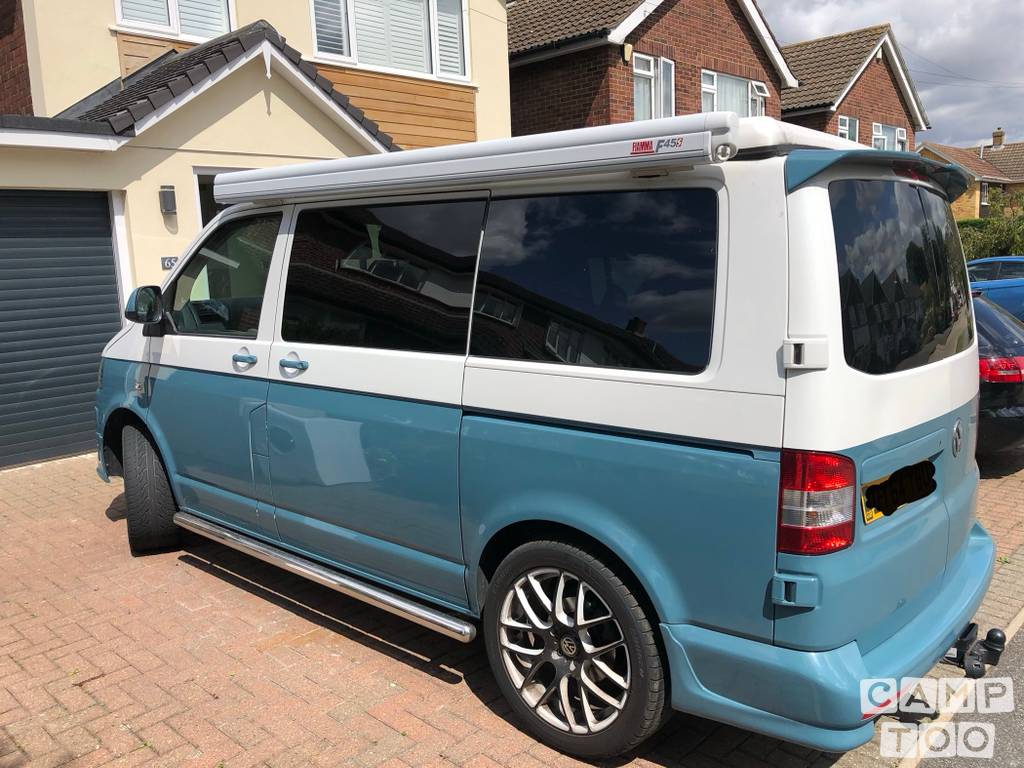 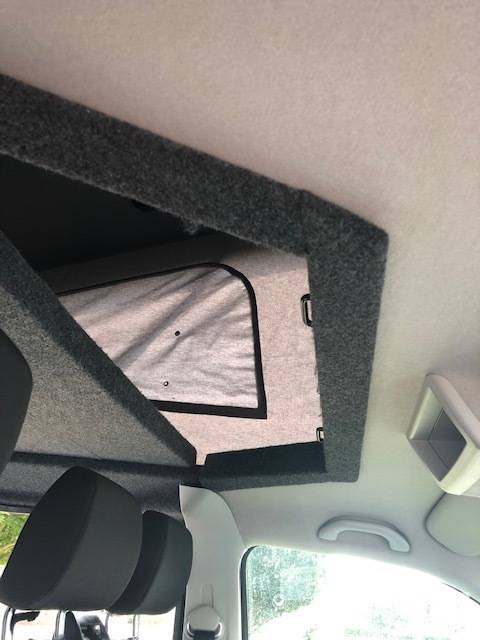 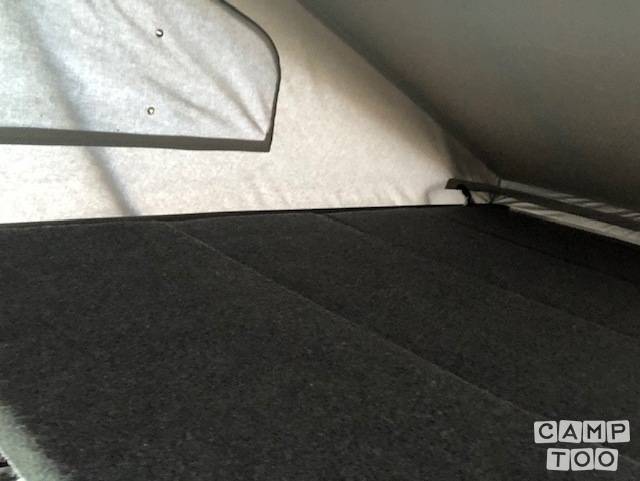 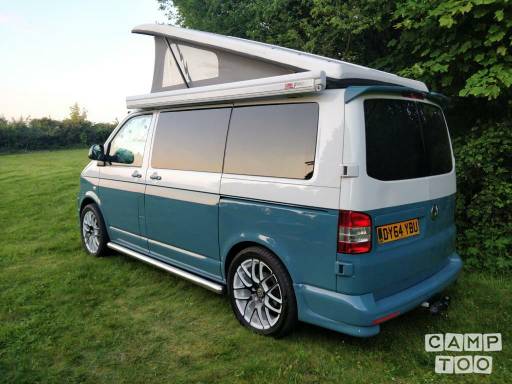 Wonderful 2 tone low mileage VW T5 camper conversion. So that you have all the equipment you need to have a wonderful camping experience, we have included in the rental price everything you could possibly need for an amazing holiday.

No smoking, please treat with respect

We have just returned from the most wonderful week long tour of the west coast of Scotland. And one of the reasons it was so fabulous was our campervan for the week was superb and the attention to detail and service we got from Ali and Hannah was second to none. Everything to do with the camper worked very well and never skipped a beat. Any questions and concerns we had before our trip were promptly answered and dealt with. Whilst on our trip we experienced the love from the VW Camper family and this camper certainly stands out and gets lots of appreciative comments. Would we hire this camper again? Most definitely. Would we recommend the camper and hirers to others? Without doubt.

Yassin
As first timers we was nervous but Hannah and Ali where brilliant with us. The camper itself is amazing very comfortable bed and the boys loved the pop up roof bed also. We wasn’t sure how we would manage but the camper provided all we needed on our family week adventure of Dorset. We packed a lot into the week and made some amazing memories. We managed to find pitches with electric hook up so we had the fridge and lights on. We had a rice cooker also which worked a treat and the gas job did a sturdy job also. A lot was provided in the camper so we didn’t need much but as first timers we packed a lot but managed to store it all away without much trouble using air lock bags and using the storage under the bed and all the cupboards for food etc. One cupboard which stored all the snacks and treats was convenient for my son to reach into whilst driving which was fun for him. All in all a great camper and owners extremely helpful. Highly recommended Amy
Thank you Hannah and Ali. We absolutely fell in love with your camper! It’s a beautifully maintained vehicle and really nicely kitted out. Our young kids had a great time sleeping in the roof and were really comfortable on the long drive to Cornwall. We will be looking to rent again. Thanks so much!

Olly
We had an excellent two weeks in Hannah and Ali’s van, we toured Cornwall, Devon, the Wye Valley and the Cotswolds so clocked up some miles and the van didn’t skip a beat and is a pleasure to drive. Be prepared to get a lot of love from fellow campervanners as this one definitely stands out from the crowd! Communication with Ali was great throughout including a thorough briefing at the start and the van has absolutely everything you could need. Would highly recommend Ali and Hannah as excellent people to rent from, Ali’s enthusiasm and positivity is certainly infectious! Would definitely consider renting the van again as it was a pleasure to be its custodian for the last two weeks, 10/10, thanks Ali and Hannah Liam
Absolutely incredible! Ali is passionate about his Camper and I can see why - it was awesome. We were getting compliments everywhere we went, it’s such a stylish camper!

Well looked after, super clean and well stocked with all the equipment you could need. Thanks Ali & Hannah Nicola
My partner and I had such a great 10 days away in Ali and Hannah’s Campervan. The van had everything we needed, was clean, and comfy. Ali and Hannah were very helpful and accommodating during pick up and drop off and were quick to reply to messages. Thanks so much for allowing us to rent your van! Richard
Hannah and Ali were brilliant, very responsive and extremely helpful throughout. Lovely campervan and a great, hassle free holiday was had by all the family! We would definitely book with them again.
James
Ali and Hannah are the most wonderful hosts. They explained everything and made us feel completely at home in their wonderful camper. We'd defo rent it again